Disclaimer: This site does not store any files on its server. All contents are provided by non-affiliated third parties.
#HLS
PLAY
#F2
PLAY
Rise of the Sufferfests (2016) 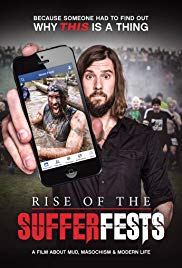 Rise of the Sufferfests (2016) Maybe it was the cast of the Today Show crawling beneath barbed wire. Or that guy from your office who looks like Rambo on Facebook. But somewhere, somehow, you've probably been exposed to the muddy, messy world of obstacle course racing. OCR is the fastest growing sport... ever. In 2016, an estimated 5 million people will pay to suffer through ice, fire, electricity, barbed wire, tear gas, mud and more. And the half-billion dollar question is... WHY? WHY-when the thrust of civilization has been to make life easier-are the masses suddenly paying for pain? It's a question we wanted to answer, so... we set off on a big, crazy, cinematic adventure! RISE OF THE SUFFERFESTS is the first feature documentary about the global obstacle course racing (OCR) phenomenon. The film explores the history of the sport, psychology behind it, personalities that drive it, and most importantly, asks what it says about the world we're living in. To help shed light on the phenomenon, investigative journalist Scott Keneally enlists a motley crew of athletes and insiders from the cultish OCR community, as well as a broad range of notable experts - Morgan Spurlock, Laird Hamilton, Tim Ferriss, Hanna Rosin, AJ Jacobs and Dr. Jean Twenge, to name a few. The self-proclaimed beta-male also dives deep into the crucible, training up and tackling some of the world's most brutal sufferfests. Far from just a movie about mud, it's a film about modern life... and the journey of a &quot;just-enougher&quot; to embrace the suck and STFU in the face of fatherhood.